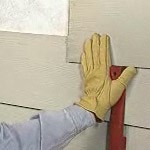 This fast, clean cutting TurboShear Drill Attachment is specialized for cutting 1/2-in. (12.7 mm) fiber cement backer board. The drive shaft of this one-hand operation accessory quickly inserts into the chuck of a corded or cordless electric drill! This versatile and economical accessory is a welcome replacement for messy, imprecise, scoring and snapping methods of trimming backer board. A wide skid-plate on the head design stabilizes cutting action for extra smooth results. This versatile shear navigates curved-pattern cuts for window and door arches and will also cut 5/16-in. (8 mm) fiber cement siding plank. The hardened carbon steel blade and skid plate ensure long uninterrupted service life. You can even rotate the tool’s skid plate to maximize acceptable cutting life. And the blade and skid plate set is also easily replaceable on the job.

A sleek, lightweight aluminum cast shear head and molded drill clamp allow maximum portability and ease to go wherever the work is. The patented compact telescoping drill clamp adjusts to fit both length and width of the drill housing including smaller bodied impact drivers. Optional spacers are stored on clamp for large motor housings. The clamp collar allows the shear head to be rotated 360° and set in any position for optimum tool clearance or to facilitate easy material flow.

*Compatible with all current and pre-existing Malco TurboShears in the market.

What materials will the turbo shear cut?

How clean is the cut?

My Review for TurboShear® – Backer Board Shear Drill Attachment

A man of wealth and taste

This thing is great.

This thing is great. I thought I might regret not spending the extra money to buy the "real" tool instead of a thing that attaches to a drill. But I couldn't be more pleased. It has been a few years since I worked with Hardibacker, but I remember it being an unpleasant, nasty job. But this thing cuts right through the stuff. Almost no dust, no dulled saw blades, no curses of frustration. Can't say how long it will last, but it seems to be of high quality. I'm not sure why they put a plastic boot around where the tool fits into the drill chuck. I'm tempted to just take it off, but I'm sure that if I did, within a few minutes I'd be saying, "Oh, so that's why." It doesn't really cause any problems, but I think it definitely would if you had a drill that needed a key to tighten the chuck. The only thing that wasn't quite right was the fact that it actually seems to cut best at a relatively slow speed and my drill tends to go from 0 to very fast, well, very fast. If you are a professional who works with Hardibacker every day, you may well want to get a dedicated tool, but for someone like me who just does it now and then, this is a great tool.

Worth every penny! Clean, easy, DUST-FREE cuts. Ditto on earlier reviewers advice to cut backside up, bottom to top. I've made a couple dozen cuts so far, and only had one very minor corner chip. I'm using a Dewalt 1/2" plug in hammer drill. I couldn't be happier unless it had been free!

Works fine, sometimes a little awkward, depending on the drill used.

Awesome investment, even for 1 big job.

I am a pretty good DIYer, and bought this for a major renovation. I specifically bought this tool because I was doing fiber cement siding on a 2000 sq. ft. colonial (panels and planks) and expected to need it for bathroom renovation cement board. I've so far only used it for my siding project and am quite happy so far. Backer board needs far less accurate cuts so I don't expect any issue whatsoever when I get to that part. FOR FIBER CEMENT SIDING: When cutting outdoors, this cuts for me about the same speed as a hardie blade in a circular saw. An experienced sider/carpenter who throws around a saw like it is another limb can probably push a sharp blade a little faster. Though blades wear down and are pretty expensive, so they do push a dull blade slowly for a while to get their money's worth. This thing is pretty quick and steady. I used it with my Dewalt cordless hammer drill (18v max NiCad) and basically never needed a battery change in a day’s work. Batteries charge in an hour, so that wouldn't have been an issue. I guess a faster drill would probably move this thing faster, but at my drill's fastest speed, that was plenty fast for me to feel comfortable maintaining an accurate cut. So the tool did take a couple cuts to get used to it. I also have to say, some of the reviews that stated that corners break are actually pretty accurate. With practice holding the blade at the correct angle with the right support, you can probably minimize this issue, but you are probably going to get some 1/2" corner chops and the edge can get a little blown out. The key thing is to cut with the back of the plank facing up because that is the direction the fibers sometimes get a little rough. Also make sure to cut toward the TOP of the plank. If a corner is going to break it is going to be at the end of your cut. You want that to be on the part of the plank that is covered by the next plank. A little rasp or quick work with a knife can clean up the cut edge. Also if you are working with stacks of product on a pick/scaffold, it's much easier to use one of these than a blade in a confined space. Manufacturer specs to call for factory to factory edges in the field. If you are looking to conserve product and go with cut edges against each other, I feel like this tool will not create clean enough cuts if you wanted to butt 2 of them together. The cuts that were made with the Hardie blade could be clean enough that you had to look real close sometimes to even see which edge had the factory cut. Also as others have stated, this thing sucks at cutting curves. If you have a very slow arc you might be able to do something. Cutting any type of circle is basically out of the question. I don't know why there were so many complaints about angles, it seemed to cut them just fine. I mean an angle is still a straight line, and it is not like fiber cement has a grain. Another note, this isn't particularly good at trimmer. Say you were like 1/8th heavy on a cut, you could knock it down with a saw blade, with this not so much. I felt comfortable taking maybe 1/4-3/8 in off a board I made a little too long. That worked for me. If a board was too long to place, that amount trimmed would drop me perfectly into the range I need to leave for caulk/expansion. If you have an angle cut that needs cleaning up, this tool does not do a good job. Pros: -Easier to use than a blade or score and snap -Ultra portable -Not sure the lifetime of this, but compared to the price of Hardie blades, exponentially cheaper. This drill adapter is also cheaper than the stand alone tools. -Construction of the tool seems quite durable. -Virtually no dangerous dust, safe to use indoors. Cons: -Not good at anything but straight lines -Not quite as clean of a cut as you would get from a saw blade. -Not great for cutting small pieces of material or making fine cuts Overall, still well worth it for me. I can handle a saw just fine, but still enjoy the safety of being able to use something like this. Also not having to spend 100s on saw blades to get through a single job or deal with large amounts of dust.

Turbo Shear is great way to cut fiber cement board. I attached it to a Ryobi 1/2" 18v drill & it cut material quickly & efficiently. It took very little energy so battery charge lasted a long time. We also purchased a blade for a 7 1/4" rotary saw & cut alot of our material with it. Blade cost-$60-will need to replace much sooner than TS Blade.

We cut about 30+ Hardibacker cement boards, doing a basement install and it breezed through them all. A grinder/cutting wheel just make a ton of mess. 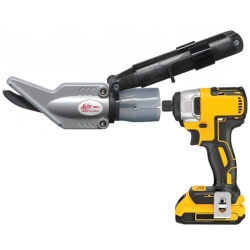 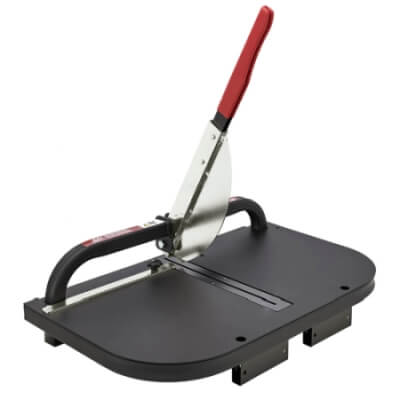 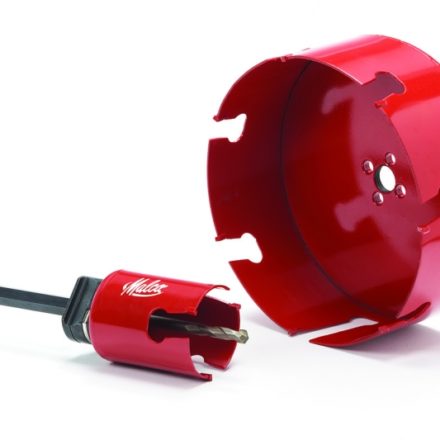