Innovation. Quality. Efficiency. Three facets of Malco Founder Mark Keymer’s legacy that all of our employee-owners honor to this day. To help tell Mark’s unique story of North American manufacturing, let’s rewind back in time to when it all started. The 1950s began a wave of rapid change and consumer prosperity, as the Great Depression had started to become a faint memory, and families were moving out into the suburbs.

Octopus-like, coal-fired furnaces in the basements of many midwestern homes before World War II were fast disappearing. As oil heat steadily gained popularity, a young steel supply salesman named Mark W. Keymer, who possessed some engineering background and tremendous entrepreneurial drive, saw this change in the industry as a unique opportunity.

Just like that, Malco was born in 1950! The origin of the Malco name came from combining Mark’s first name and the first name of an early associate named Al, who owned the garage where initial operations began. Malco stood for “Mark and Al’s Company.” In 1954, operations moved from Al’s garage to Mark’s basement in Minneapolis, with Al leaving the company. Malco’s first business office consisted of the kitchen table, a shoebox filing system, and a manual typewriter. Gerry Keymer, a son of Mark, noted, “I remember being a small child sitting on the stairs of the basement, and they needed to do some welding for a product, so they unplugged the dryer and plugged the welder in the dryer outlet. They were shooting sparks all over the basement. That was pretty exciting stuff for a young child watching.” 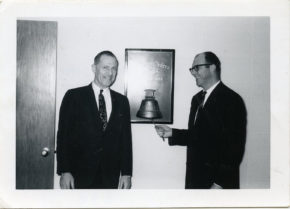 Mark began manufacturing and marketing a revolutionary 5-blade hand crimper, followed by other specialty hand tools for fabricating and installing the new at-the-time ductwork of forced air heating systems. Now a late son of Mark, Kevin Keymer said, “He saw the need for seamers and notchers [on the jobsite].” Unlike anything on the market, the tools employed extra linkage between handles and jaws to produce compound leverage, which was well received by HVAC professionals. Dave Keymer, a son of Mark, noted, “He had always tried to improve products. The compound leverage on the tools was one thing he was proud of.”

“My father came by inventing naturally,” said Paul Keymer, a son of Mark. In the beginning, “He would bring the tools with him and show them to the guys doing the HVAC] work on the job sites, and when they didn’t give them back, he knew that he had a good tool.”

With buzz beginning around Malco tools, Mark placed advertisements in the American Artisan and Snips Magazine to generate national business. He had help from his wife Dorothy to keep the books and proceeded to hire his first employee and independent sales rep. Gerry adds, “[Mark followed] the golden rule: the way he wanted to be treated if he was a customer. It was the same way for all the sales reps, employees, and suppliers.” The following decade included the big move to Annandale, MN, where the current Malco headquarters and North American manufacturing facility is located. In 1973, the move to Annandale was complete, and Mark’s son Gerry is named vice president. In 1978, Mark Keymer retired as president with his son Gerry taking leadership.

After a couple of decades of growth, the company experienced another significant shift in ownership. In 1999, on the eve of Malco’s 50th anniversary, Gerry sold his share of the company to begin the process of transferring ownership of Malco to an Employee Stock Ownership Plan (ESOP). Now, the company is 100% employee-owned, with open book financials so that everyone knows where the company stands, where the company wants to be, and what everyone needs to do to meet their goals. In 2001, Founder Mark Keymer passed away, but his memory lives on. Gerry notes, “He had a real legacy that stayed with the company.” A handful of years later, in 2007, Mark was inducted into the Minnesota Inventors Hall of Fame. “He was a very interesting and capable man. It took all four of us boys to fill his shoes. With all of our talents pooled together, Mark was a tough act to follow,” said Dave.

To learn more about Malco’s history, check out our 70th-anniversary blog: https://www.malcoproducts.com/blog/celebrating_70_years_of_malco_evolution_innovation/

To view Malco’s “Home Movie” with the quotes from Mark’s sons: https://www.youtube.com/watch?v=IsagOJiZkCw